As we reached the border the road threaded itself between numerous rows of intimidating barbed wire. Containing what? 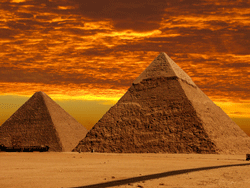 Guard dogs? Land Mines? Who cared? Being on foot in this desert would be at least as bad. This reality was almost like an adventure movie. After a few kilometres we reached the crossing. The bus pulled through a gate and we exited the air-conditioned bus to confront the desert heat and the Customs Officials. Luckily there were only 13 of us–it took the four officials some 45 minutes to process us, and we were just leaving the country! After the Bureaucratic process we filed back onto the same bus and departed through the same gate. A short distance further we went through yet another gate. We were on the western edge of the Gaza Strip, crossing into the Sinai of Egypt. Why the bus? Quite simple, really. My plans were changed abruptly and there was no space on any air plane for some days. Besides, I like adventures.

Entering Egypt was easy–just have your paid-for Visa, pay the entry fee, and wait, and wait, and wait, and …. On the other side of Egyptian Customs we finally found our new bus and piled on. As the bus became an oven we got off again. “Twenty more minutes,” said the driver. After the third repetition we asked why the delay. “We’re waiting for the Police Escort.”

The Official reasons for the Police Escorts are that foreigners may not travel in certain parts of Egypt unescorted, and, not to mention, to protect the tourists from terrorist attack. Oh, how obvious. After two more hours of waiting we finally departed, soon to discover the True Purpose of this escort service.

The Escort was a small covered pick-up truck, with two policemen holding the barrels of their automatic weapons out the rear side windows. A driver and flashing lights completed the display of force. The bus was a modern sit-above-the-driver-with-a-picture-window-view affair. And what a view we had! The bus driver usually drove in the middle of the narrow road. Around left curves he was usually on the left shoulder of the road. Sometimes he zoomed up behind the police vehicle until he was an arms length away. Even the cops were uneasy. The True Purpose of the Escort, it became apparent, was to warn the oncoming traffic: get out of the way–the bus is coming!

Cairo is an incredible cacophony, the sounds matched by the equivalent in every sense–aromas, colors, textures, and flavors. And although I spent some days exploring this amazing city, and could write pages of descriptions, that must wait, for I was on another mission. This time to The Chambers.

My first visit to Giza, Egypt was very touristy, with an obligatory camel ride around the pyramids and a short, prohibited, climb on one of the smaller pyramids—a scouting trip, as it were, as I was short on time when I first arrived there. However, I did make some contacts which led to more adventures, briefly described below.

My second visit was the working trip–I had to enter the Great Pyramid.

Being inside the Great Pyramid alone was the challenge. The solution (“There is always a way”) was very simple—go inside as a regular tourist, with about 150 others, and wait until all of them left!

The King’s and Queen’s Chambers are modern misnomers, and really have no gender associations. They do work together and have remarkable energy. It was totally clear that the Pyramid is a great energy transmitter. Not as powerful as once, since the original emplaced crystals are no longer there and modern archaeological excavations have damaged things. The two Chambers work together to create the overall energy effects. This energy you can really feel!

Entering the Sphinx is an altogether different proposition. My first effort found me dressed as an Arab, at 4 o’clock in the 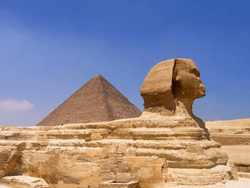 morning, scaling a stone wall with my guide. The idea, as things work in Egypt, is to “pay” (bribe) the armed guards for their protection while there. This particular morning, however, one guard got uneasy and would not go along with the others, in fear of being found out. Oh, well, another visit would make it work. Another effort a few nights later: Again, dressed as an Arab, my guide this time led me in from the west, through the old graveyards. The Pyramids and Sphinx are magnificently beautiful under the full moon. But that same moon makes us readily visible, too. We make our way to the Sphinx, crawl beneath a fence, and get close. There are too many regular police (as opposed to the Antiquities Guards) out that night, and we are too easily seeable. I do make the “Attune­ment to The Truth” LT™ next to the Sphinx, but I am unable to enter the Sphinx itself that night. There will be a time for that adventure, later!